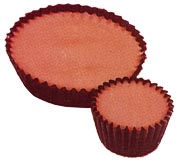 I thought that Hershey Foods seemed to be going a little overboard with the Reese’s line as of late. For years all you could get was the Reese’s Peanut Butter Cup. Sure they had different size packs; the single, the standard two pack, the fat boy four pack, there were even the miniatures. Of course there were also the Reese’s eggs in the Spring, one of my personal favorites. Reese’s shook things up a bit with the introduction of Reese’s Pieces, in fact they proved to be especially popular with certain aliens. Other than the pieces, things seemed pretty quiet at Reese’s for a long time.

However, over the last couple of years I’ve noticed a steady string of new products. Not just special holiday candy either. It looked like Reese’s felt the need to be creative: Fast Break, NutRageous, ReeseSticks and more recently, Bites. All basically the same thing combined a slightly different way or with some additional ingredient. More recently, I saw a white chocolate Reese’s which for some reason peaked my interest. I wondered what other craziness they might be thinking of at Hershey.

Well, according to the Reese’s web site, the white chocolate Reese’s are actually part of their 2003 Limited Edition line. Now this is something to get excited about. There are still a couple of new Reese’s candies coming our way this year: July is the Reese’s Big Cup, August is Honey Roasted and in September, the wacky Inside Out Cup. Now, I’m not exactly sure why the year 2003 is significant enough to warrant an “LE” line of candies. Maybe it’s to mark the 40th Anniversary of the sale of H.B. Reese Candy Company to the Hershey Chocolate Company. Or, it could be that the company wanted an excuse to roll out five new products in rapid fire succession. Whatever the reason, I can’t wait for September and the Inside Out Reese’s!