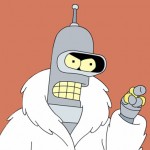 The Mars Pathfinder Sojourner Rover, Unimate, R2-D2, and HAL 9000 were inducted into the Robot Hall of Fame yesterday at the Carnegie Science Center. Conspicuously absent from the list of inductees was Bender (pictured left) of Futurama fame. How could the jury overlook the work of Bender the robot? I can’t help but think that it had something to do with his abrasive personality. Does this mean that we can expect only robots that are soft spoken or emit useless beeps to make it to the hall of fame? Bender might not be as lethal as HAL 9000 or as cute as R2-D2 but he certainly deserves a place in the robot hall of fame. Don’t let this happen again next year, nominate Bender now!

One thought on “Bender Passed Over for RHF Induction”