This year’s Thanksgiving was pretty low key. I only made meat, and one pie. Our friends brought the rest–a bunch of tasty salads courtesy of the local CSA with inspiration from Plenty. 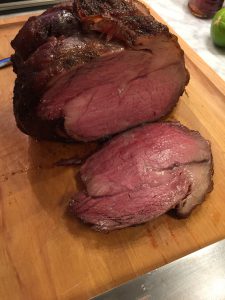 I cooked a small, boneless rib roast on the egg. I followed the guidelines from Playing with Smoke and Fire. The roast was a bit under 4 pounds. I cooked it at 250° for about 2.5 hours. When the meat was at 220° I took it off and fired the egg up to 500° and put the roast back in for a couple minutes to get more color. After a rest of about 30 minutes, I carved thinnish slices and served with a horseradish sauce.

The roast received high ratings all around. I debated on whether or not to use hardwood and opted to go without. There was an slight hint of smoke from the charcoal. Next time, I might try a bit of wood to get some more smoke flavor.

The pie was Magpie’s Bourbon Butterscotch–a favorite around here. The crust was quite homely, so no pictures. The flavor, however, was right on. I let it cook at least 8 minutes longer than the 45 called for in the recipe, but the middle of the crust was still undercooked. Next time, I think I’ll let it go even longer.