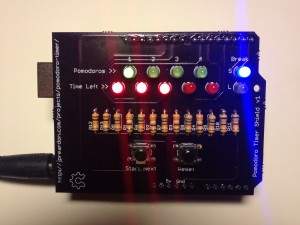 This is a very simple Arduino shield with only one purpose: to Serve as a timer for practicing the Pomodoro Technique®. If you’ve never heard of this technique, you might want to have a quick peak at their site before reading on.

What follows is fairly long winded. If you’re not all that interested in the process, and just want some links to the Arduino sketch, schematics and board layout, skip to resources section at the end.

I wanted very simple project that could be completed in a short amount of time and I wanted it to be useful. Since I am sometimes prone to fits of procrastination, I am familiar with the Pomodoro Technique® and find it to be a good way to help get things done. In my environment, the prescribed tomato kitchen timer is too noisy. So, a specialized pomodoro timer to use at work makes for a great, simple project.

I use the timer daily at work, I used various bits of knowledge I’ve gained while experimenting with Arduino and electronics, and I learned some completely new things. So, I proclaim this project a success. The only thing I might do differently in the future would be to hold off on doing a schematic in Eagle until it was time to create the PCB. Of course, if the project called for a more complex circuit, a schematic early on would be a good idea.

While working on this, I had some ideas for how this project can be improved. For example, using a more “analog” type display for the countdown timer would be nice. Another idea was to incorporate some form of treat dispenser as it would be nice to get a piece of candy or a nut as positive reinforcement for keeping on task.

Speaking of treats, if you’ve read this far, you deserve one. If you have any questions or comments, please don’t hesitate to contact me.

You can find the Arduino sketch, schematics and board layout on Github.

This project uses an Arduino Uno. The PCB was designed using CadSoft Eagle and fabricated by OSH Park. All of the LEDs, switches and headers came from Adafruit while the resistors were from DigiKey.

If you’re new to Eagle, you will be well served by going through a tutorial before trying to create a board for your own project.