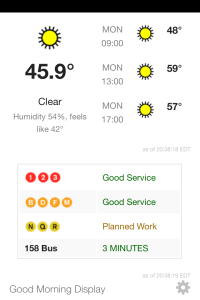 The Good Morning Display is an effort to put some actionable information in front of me while I’m getting ready for work in the morning. This little project had a couple false starts, but it’s at a point now that it actually works well–for me anyway. I plan to do more, but I need to set it aside for a time while I work on another project. Before doing that, I want to document what’s been done so far.

The current application (see screenshot) uses an old iPhone 3GS to display the current weather conditions as well as the forecast for afternoon and evening (or the next morning/afternoon when viewed in the evening). It also shows the current transit status. All of this information is updated frequently. The location for the weather is user configurable as are the transit lines displayed. The user settings are stored in the browser which minimizes what needs to run on the server.

What follows are the details. As per usual, the post is long, if you are most interested in what I build this on and/or the code, skip to the resources section at the end.

There are a few things I really want to know about in the morning before I leave the apartment. For me, in order of importance:

Of course, all of these things are available on both my computer and phone. Before you dismiss me as just lazy, please hear me out. This information housed in a few different applications and web sites. Rather than firing up the computer or poking around on my phone, I’d rather just glance at one screen while drinking my orange juice to get what I need. If, for some reason, I want more detail, I can look it up on another device.

Initially, I’m only interested in displaying the first two items (weather and transit). The other pieces of information are nice to have, but I haven’t implemented them yet. Those first two items are important because they inform a couple key decisions for me. Most importantly, what mode of transit I’ll use. If the weather is good, I might bike. The bicycle will be even more attractive if the weather is good AND the trains are all screwed up. If the weather is not so great, I’ll opt for the train, and make sure I am dressed properly. There are a couple subway options for me as well, so if one is experiencing delays, I might choose the other.

The display shows me what I want, and I learned a lot along the way. At best, my HTML skills were rusty. Recently, I jokingly mentioned to some people at the office that the last time I did any real HTML work on my own, tables were a totally legit way to handle page layout. That hasn’t been the case for quite some time now and for those learning or relearning, all of this CSS business can be a bit daunting. Luckily, frameworks like Foundation or Bootstrap help, a lot.

While on the subject of frameworks, there’s something to be said for understanding just what these frameworks are doing for you. It’s a good idea to do some lower level stuff on your own (e.g. build your own, simple, responsive page from scratch), even if it is just to experiment. I did a bit of this too, and at this point, I’m much more comfortable with HTML, CSS and Javascript than I was when I started.

Now for the bad parts. The code behind this is fragile and nowhere near production quality. Plus, this site was not built around progressive enhancement and will fail miserably on anything but the most modern of browsers. These are things that are would be unacceptable at my day job and I’d like to improve in these areas.

It is built on Foundation, so it’s responsive. But, I concentrated only on the small breakpoint. The larger one needs a lot of work. I’d like to pull in a few more bits of data from my list and the small display size is sort of maxed out at this point. This version will serve as the base for a larger display in the near future.

Overall, I’m really happy with what I’ve got so far and look forward to enhancing it in the future. If you’re still with me, thanks for reading this far. If you have any questions, critiques or comments, please contact me.

You’ll find both the front and backend code on Github. The backend consists of two simple Python scripts, but you’ll need them for transit status. If you want to run this yourself, download everything to a server and make sure that the Python script is executable. You’ll also need an API key from Weather Underground (free).

As for the design, I was inspired by several different projects, many of which where created by people trying to solve similar problems for themselves.

One thought on “Good Morning Display”