I’ve always been interested in signage and informational displays, especially those that convey changing information. This long post catalogs a few displays from which I’ve been drawing inspiration to build my own (more on that later).

Most of these are DIY projects that people have made for themselves, but there are a couple public displays as well. Did I mention that this is a long post? More after the jump… 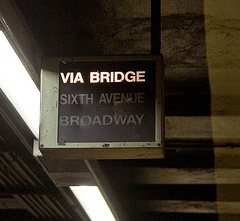 This is a route indicator sign of which there are several hanging in the NYC Subway’s Dekalb station. These backlit displays are simple, easy to read–even from a distance–and durable. I don’t think they make many displays like this anymore since they aren’t all that flexible and changing the information requires a rework of the sign. Despite their inflexibility, I really like these and can imagine that there is a relay somewhere that activates the lights with a really satisfying click. 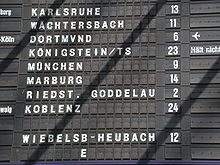 I have to mention split-flap displays, a.k.a. Solari boards. Once a fixture in airports and train stations everywhere, over the years, many split-flap displays have been replaced by other technologies. There’s something about the mechanics, sound and motion of these that make them endearing. The sound of the flaps may be an indicator that the train or plane taking you somewhere exciting (or home) will soon be boarding. I’m not the only one that has a soft spot for these types of signs and they’ve inspired all sorts of facsimiles. This MTA Solari by Mark Breneman being but one example. 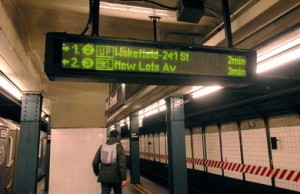 The MTA maintains countdown signs on the IRT lines and the L. What they lack in aesthetics, they make up for in useful information. More recently the MTA has made the data for these signs available to developers so this information is also available when above ground. 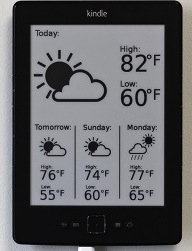 Matthew Petroff’s Kindle Weather Display is a beautifully simple weather display. His custom icons (based on Noun Project images) render very crisply on the Kindle’s e-ink display. Until quite recently, e-ink has been a bit too expensive for use in DIY projects. Even now, the experimental e-ink displays are quite small. Matthew got around this limitation by finding an inexpensive Kindle and using it for a dedicated information display.

Another, more recent Kindle weather display by Pablo Jiménez Mateo adds some more information to the display (tasks and appointments). It is implemented as wallpaper, so the Kindle can still be used for things other than an information display. 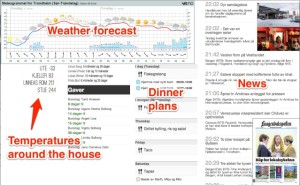 Andreas Åkre Solberg’s wall mounted iPad display puts a lot of information on the screen for his family. It incorporates some very personal and localized information like what’s on the menu for dinner and temperatures from various rooms around the house. 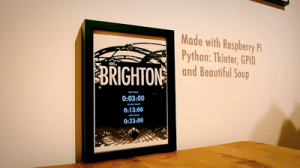 This “picture frame” train schedule display is a small LCD display encased in a frame. It is driven by a Raspberry Pi. The finished build is very nice and would look good on most walls. This is good example of a fairly personalized display. Changing the data on the digital display to show other train times would be trivial, but one would need to put new art in the surrounding frame.

via Hack a Day 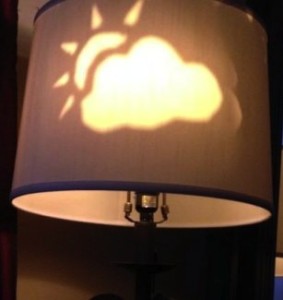 This weather lamp is a great example of a more ambient display. It relays enough information about what’s going on outside without making the viewer sort through too much detail. Very nice. Check out the video to see it in action.

via Hack a Day 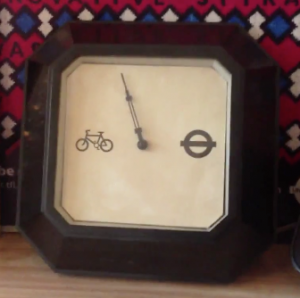 Along the same lines is the Bicycle Barometer, which I’ve written about before. This is a display that is very specific to the user, but gets the information across quickly, without being overly detailed or intrusive.

These are just a small sample of the informational displays I’ve made note of lately. All of us encounter these sorts of displays on a daily basis–some better than others. If I’ve missed a noteworthy one, drop me a line or add a comment.

One thought on “Informational Display Ideas and Inspiration”