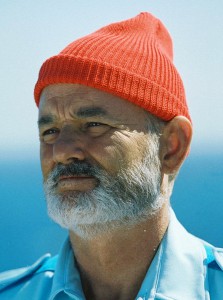 Last year, we set up a Dashing dashboard in the office. One of our favorite bits was the quote widget, which cycled through a list of quotes that we occasionally added to. I’ve left the organization and the company has been acquired, so that dashboard is dark. However, I felt the collection of quotes should be memorialized, so here they are, along with a random photo of Steve Zissou, our patron saint (for lack of a better term).

Oh my gosh! Doge is going to look so good…
– Kate

The wonderful thing about standards is that there are so many to choose from.
– Andrew S. Tanenbaum

If you want to do something that’s going to change the world, build software that people want to use instead of software that managers want to buy.
– Jamie Zawinski

Design is all about finding solutions within constraints. If there were no constraints, it’s not design – it’s art.
– Matias Duarte

The value of an idea lies in the using of it.
– Edison

A material metaphor is the unifying theory of a rationalized space and a system of motion. The material is grounded in tactile reality, inspired by the study of paper and ink, yet technologically advanced and open to imagination and magic.
– Google Design Team

All problems in computer science can be solved by another level of indirection.
– David Wheeler

On two occasions I have been asked, – “Pray, Mr. Babbage, if you put into the machine wrong figures, will the right answers come out?”
– Charles Babbage

Zawinski’s Law: Every program attempts to expand until it can read mail. Those programs which cannot so expand are replaced by ones which can.
– Jamie Zawinski

If you’re willing to restrict the flexibility of your approach, you can almost always do something better.
– John Carmack

We have a responsibility to be teachers — that this should be a central part of [our] jobs… it’s just logic that some day we won’t be here.
– Ed Catmull

Snackbars are so cool! Toasts are like, whatever.
– Kate

The best way to improve your presentation is to get better content.
– Edward Tufte

It’s been five minutes since Adobe asked me to install an update. I hope they didn’t go out of business or something.
– Bill Murry

Everyone loves my pretty pink fur, and casting spells is fun for sure!
– Shipit

It ain’t what you don’t know that gets you into trouble. It’s what you know for sure that just ain’t so.
– Josh Billings

Design is only obvious in retrospect.
– Luke Wroblewski

If you have to ask ‘will this annoy users?’ the answer is always yes.
– Matt Galligan