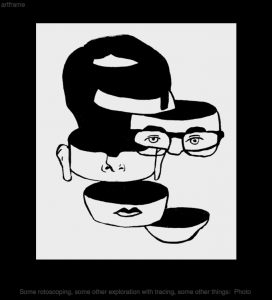 Carl wanted a thing that displayed animated GIFs from artists’ feeds. That sounded like a quick Saturday project–the result is artframe. It’s sort of like a photo frame that displays random animated GIF art from a couple tumblr feeds.

A demo is running on my site, and the code is on github.

I think Carl has big plans for this. In the meantime, I might revive an old laptop LCD and make an actual photo frame.