Everybody loves meetings, right? Probably not, but even I, hater of meetings, concede that they are necessary. The problem is that there are far too many of them. Fast Company’s article on the subject of meeting waste is full of eye-popping factoids like this one:

…Bain & Company found that a single weekly meeting of midlevel managers was costing one organization $15M a year!

The article also references Harvard Business Review’s meeting cost calculator, which is nice, but a bit too manual for my tastes. It reminded me of an idea I’ve batted around with fellow meeting attendees at at least two different jobs.

We’ve talked about all sorts of kooky ideas*, but the The basic idea is to make meeting cost very visible. The hope is that making the costs visible will make people more mindful of time spent in meetings. And, perhaps, they might be more judicious when scheduling them. Last year, I scribbled this crude little widget in the margin of my notebook, which sort of captures the idea. Yes, this was sketched while sitting in a long meeting with more than 30 attendees: 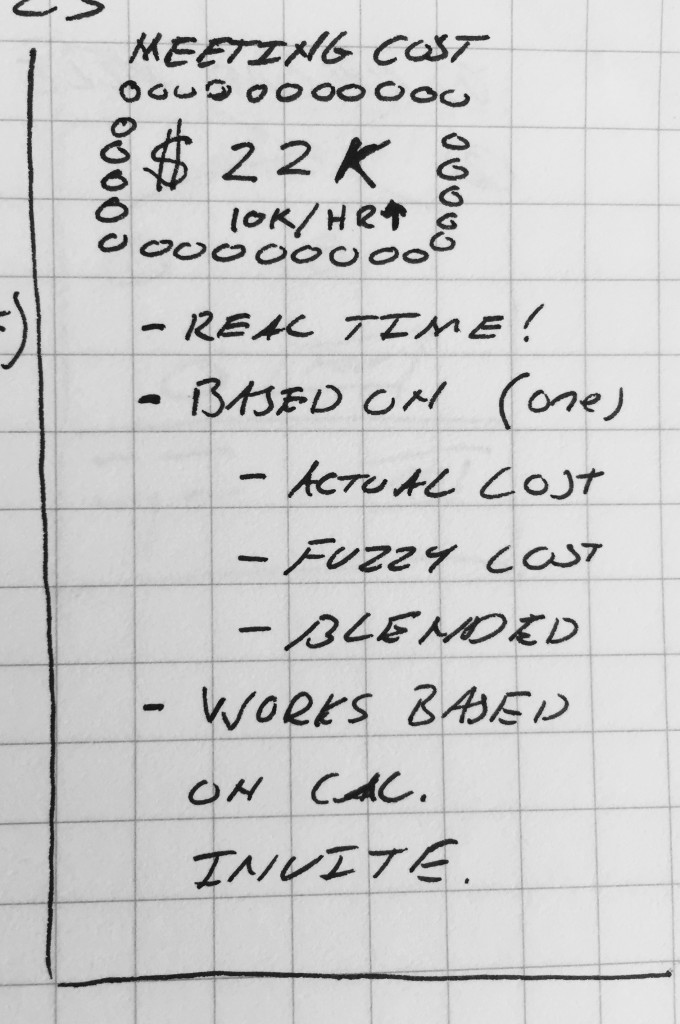 Since no one should be expected to calculate such costs manually, this would be automated based on information known by the organization. Basically, the length of meeting and the cost of each of the attendees. Since massive salary gaps between employees may be embarrassing and distracting, an average or blended rate might be applied.

With that information readily available, it could be used in many places, such as:

Travel expenses would prove harder to obtain in real time, but it would be wonderful to see those as well. How about the lunch that was just delivered so everyone could just power through? So many possibilities here…

Perhaps someone, somewhere has already implemented a system like this. If it exists, I’d love to see it in action. If not, maybe one day, I’ll be able to create it. If only I didn’t have so many meetings to attend.

Thanks @clairemoncrief for retweeting the Fast Company link!

* One of the ideas involved a meeting room gradually filling up with ping-pong balls representing dollars spend on meeting time. Meeting attendees would be forced to exit the meeting room when the balls made it impossible to see their laptops, phones, presentation or each other. A fun idea, but perhaps difficult to execute. Another idea called for actual dollar bills that fall from the ceiling onto the conference room table, with a similar effect.