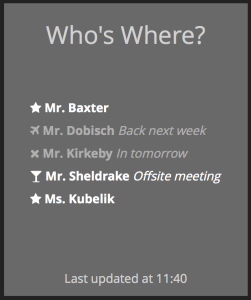 I’ve created a Simple In/Out Board Widget for Dashing. It’s quite basic, but it gets the job done. It reads the status information from a text file, so there’s little overhead and no pretty interface, sorry. We keep our text file on Dropbox, so any of us can edit it easily.

Unlike most of the other widgets we’ve created for our Dashing dashboard at the office, this one might be useful for other people. So, I’m sharing it. If you’re interested, you can install from this gist.

Update 2015-12-10: Someone in the comments was trying to get this to work with Google Drive. I tweaked the widget a bit so it can read a file from Google Drive. The gist has been updated.

Recently, a coworker mentioned that we should have a dashboard to make some of the metrics we are tracking more visible. It reminded me of this post (via Adafruit) I read about Dashing.

We were able to get Dashing running very quickly. This post about setting up a Dashing dashboard was quite helpful as was this one about installing the right Ruby version. Most of the installations I read about used an external server to host the dashboard, which wasn’t really an option for us. For those that don’t have a good place to host, you can try installing Dashing on the Raspberry Pi, as we did. The raspi doesn’t have a ton of horsepower, so compiling binaries and such will take longer than you might be used to, but it has no problem running Dashing.

So far, I’ve got nothing but good things to say about Dashing. It’s easy to set up, there are a bunch of additional widgets available, and creating your own widgets isn’t difficult.

As an experiment, we cooked up the basic World Cup widget shown here. It has quickly become the most referenced dashboard widget in the office.

Leopard comes with Rails, but I prefer to roll my own in an effort to keep my environment stable. As always Hivelogic has the goods:

Videos of the Gotham Ruby Conference talks were posted way back in September; I promptly forgot about them. While cleaning out some files today, I was reminded of their existence. I’ve added links to each of the talks in my original Gotham Ruby Conference post from April. Better really late than never I guess. Have fun!!!

I first heard about Adhearsion at GoRuCo ’07. Jay’s talk at GoRuCo was great and I think it got a lot of people excited about VoIP. Since then, he has really polished his presentation. At the Ruby Hoedown, he introduced Otto, übergeek and Asterisk neophyte. Having the fictional Otto in the first part of the presentation demonstrates the benefits of Adhearsion quickly and in a way the audience can relate to. Well done Jay.

You can check out Jay’s Adhearsion presentation at Ruby Hoedown 2007 on Confreaks.

As a side note, the presentation of, well, presentations on Confreaks is great. The 2-up display of the the speaker and the slides is much better than only being able to see one at a time.